When I first made an account on Mastodon, Twitter’s supposed successor, I had a lot of questions.

Does it scratch the Twitter itch? What server do I join? How does the whole server thing work? After spending some time on Mastodon and learning more about decentralized platforms in general, I’ve got the hang of it. But Mastodon’s resource center is pretty technical and didn’t help much in explaining what new users might be wondering about.

I’ve done the legwork of answering your burning questions about how Mastodon works, so that you can be spared from the anxiety of signing up for a new social media app. Read on for an FAQ breakdown.

Mastodon is a heavy metal band from Atlanta, Georgia that— oh wait, that’s the wrong Mastodon. Mastodon is a social media app that’s been around since 2016.  It’s powered by a network of independent servers all around the world. The network is called the “Fediverse,” from the term “federated social media,” which is the official term for a platform that is decentralized or not controlled by a single private server.


Of all the Twitter alternatives in recent conversation since the Elon Musk takeover, Mastodon has emerged as the next best thing. Mastodon is very similar to Twitter in that they’re both microblogging platforms. You can publish short posts, and they go into a central feed where you can read other people’s posts. You can also “star” (like), “boost” (retweet), and share posts, and follow other people.

Unlike Twitter, and basically every other popular social media platform, Mastodon’s self-governed approach is to give users autonomy and decision-making power over how the platform functions. Any person or organization can make a server. Much like subreddits, servers are moderated by volunteers and have their own rules and protocols.

But people are also signing up because, for now, it seems to be a less-toxic version of Twitter, which let’s be honest, was already a cesspool before Musk bought it.

Important difference: There is no, I repeat, no verification system.

OK… so how do I sign up for Mastodon?

Create an account by going to the Mastodon website on a desktop or downloading the app on iOS or Android. Immediately, you’ll be asked to select a server to sign up with. This is where it gets a little confusing, so stay with me. 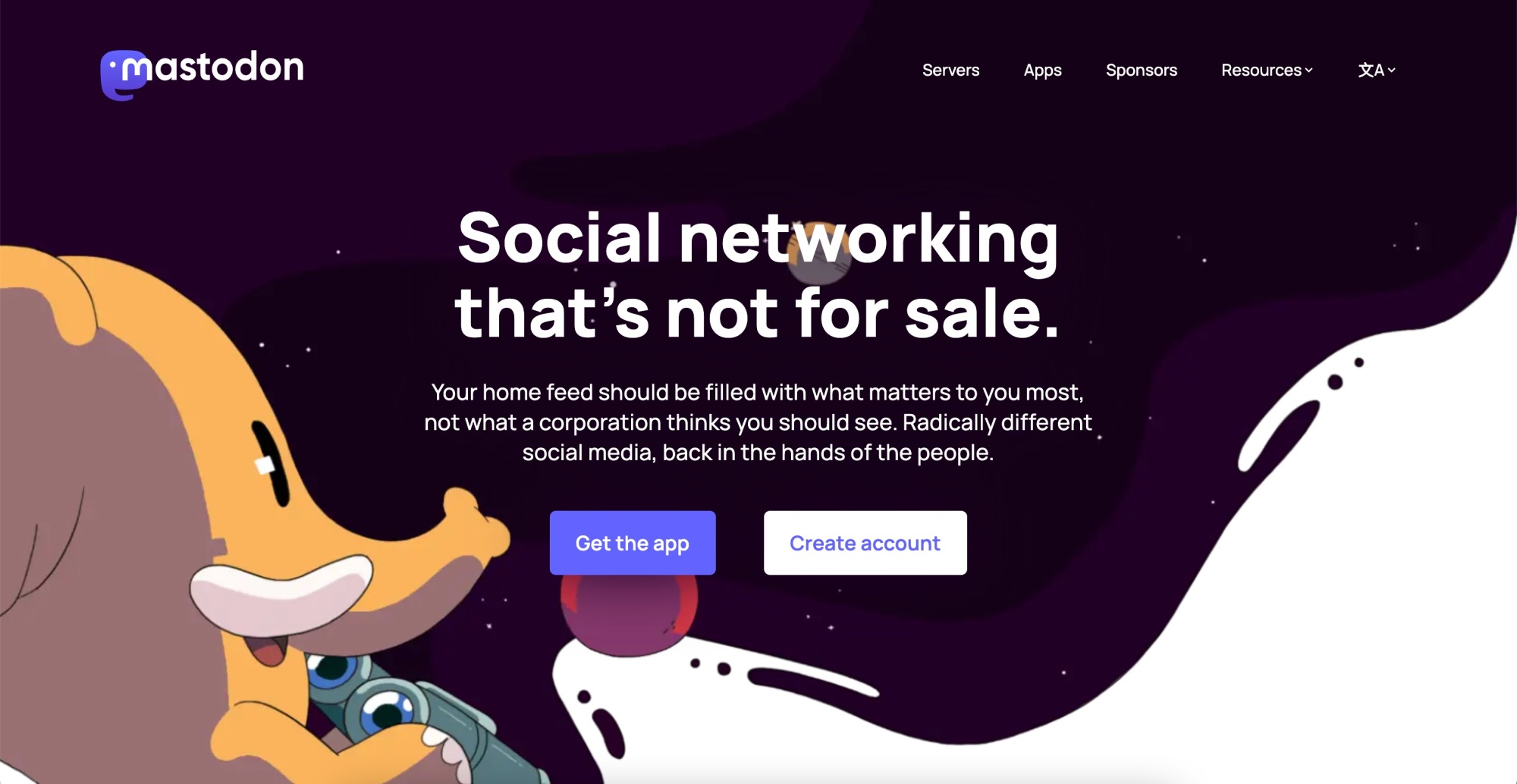 The first step is choosing your server, but it’s not as intimidating as it seems.
Credit: Mastodon

On this next page, Mastodon gives you a list of servers to choose from. They’re basically affinity groups you can join based on your interests. Servers range from disable.socialfor people who are chronically ill, mentally ill, and/or disabled, to mastodon.lol for members of the LGBTQ+ community, to newsie.social for journalists.

Does that mean I can only interact with people on my Mastodon server?

Nope! All servers interact with each other behind the scenes. The only noticeable difference is that people have different servers at the end of their account addresses.

The signup page features a list of servers that have been approved for complying with Mastodon’s policies. But there are many other servers out there. Submissions to be featured on the page are reviewed manually, and there’s probably a backlog of approvable servers out there, so don’t feel like you need to stick to this list. 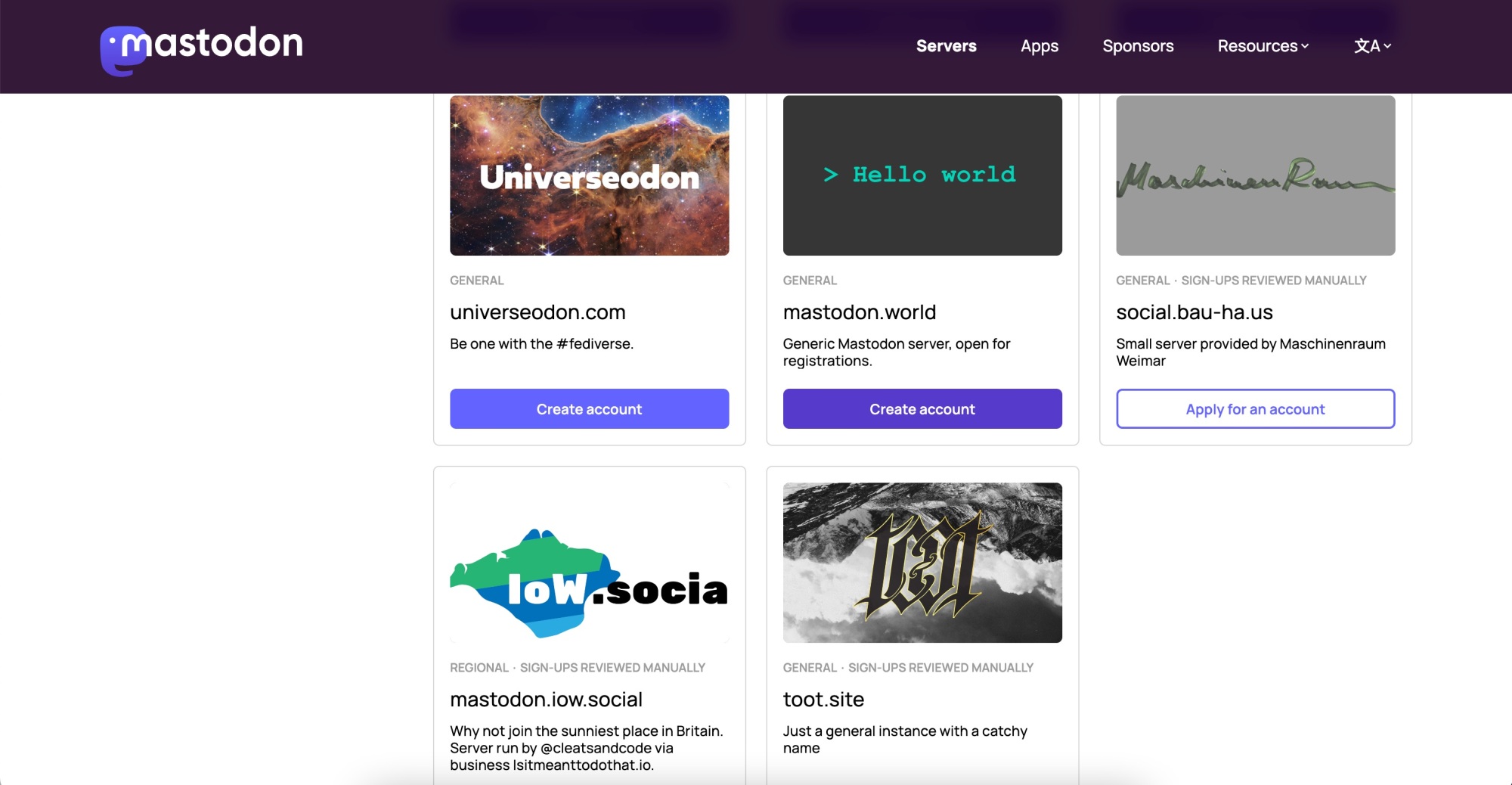 Choose from the list of Mastodon-approved servers.
Credit: Mastodon

What if I don’t know what server to choose?

There are also general servers like mastodon.social. But ultimately, it doesn’t really matter because all servers interact with each other. Joining a particular server doesn’t mean you’re restricted from seeing certain content. It just means that is the specific server that’s supporting and moderating your account (which we’ll talk about more in depth later). You can also set up your own server, it’s a more advanced process that requires some knowledge of serving hosting and money to support it.

There’s no one server that’s better than another server. Actually, as fedi.tips points out, joining a large server might be worse because “there’s a much smaller staff-to-user ratio.” You can also transfer your account to another server. There’s a growing list of resources for finding the right server. Mastodon has its own search tool for finding servers, aka, instances by keyword, and there’s also a list on fediverse.party, coxy.coand a quiz tool on instances.social. Also, you don’t need to create an account to view a server, which is useful for helping you decide. 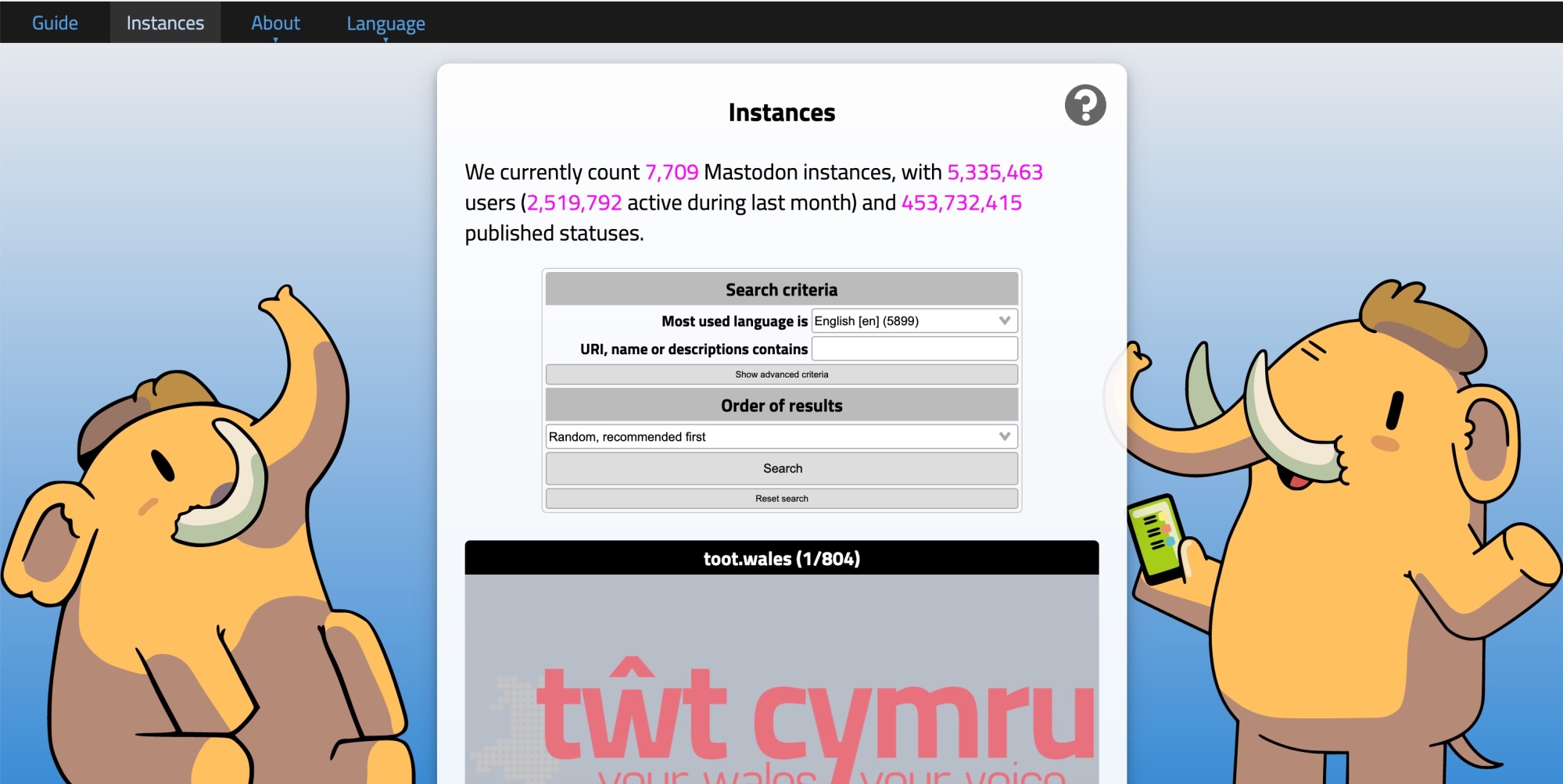 How do I start posting? 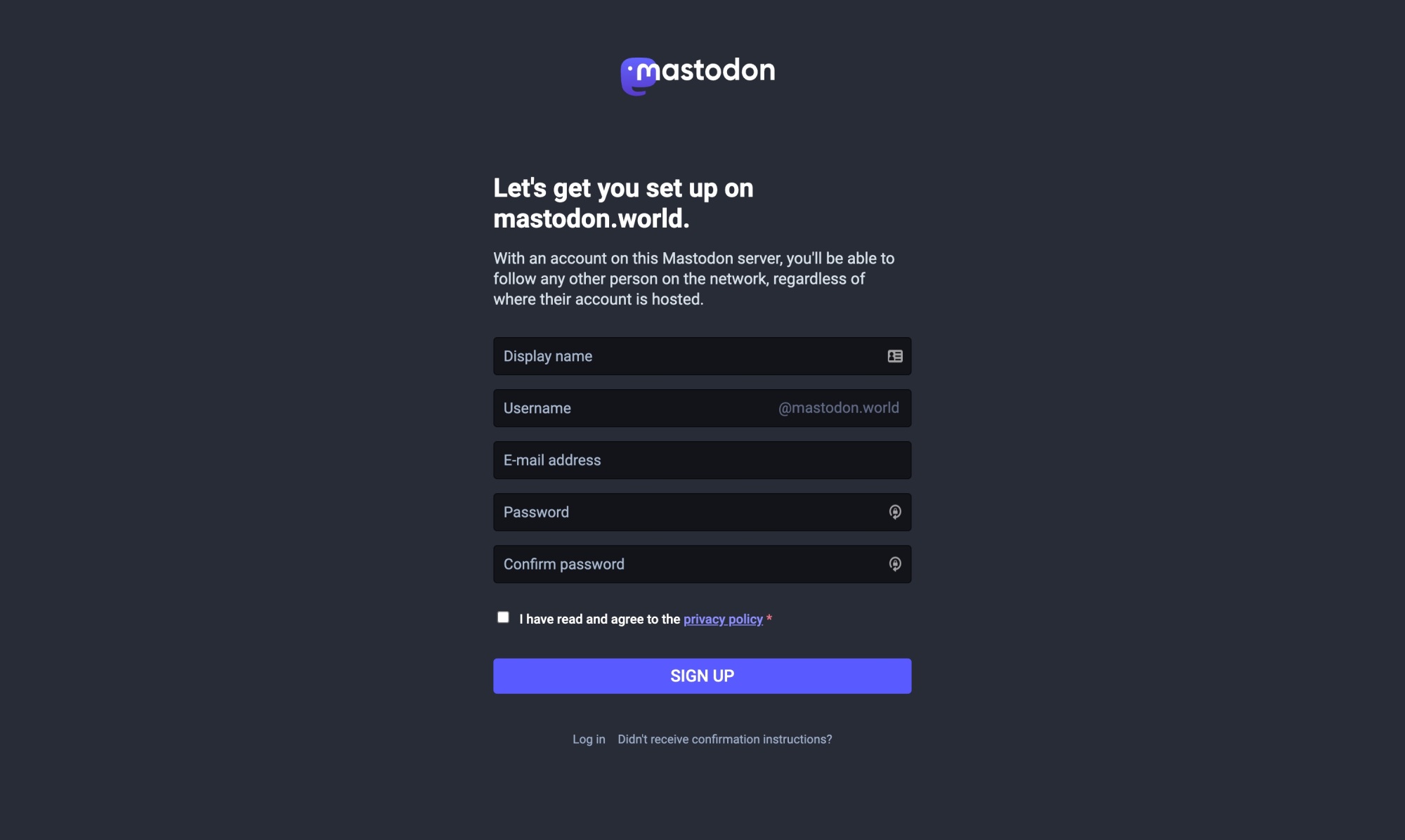 Filter what content you want to see in your timeline.
Credit: Mastodon / journa.host

On the left sidebar, you’ll see a text box for writing and publishing posts. You can search for people and hashtags to follow right above the text box. But there are several tools out there that have done the following legwork for you. Trunk and fedi.directory have a list of notable people to follow organized by theme, and Debirdify and Fat finder find all the people you follow (or followed, RIP) on Twitter and show you their Mastodon account if they have one. 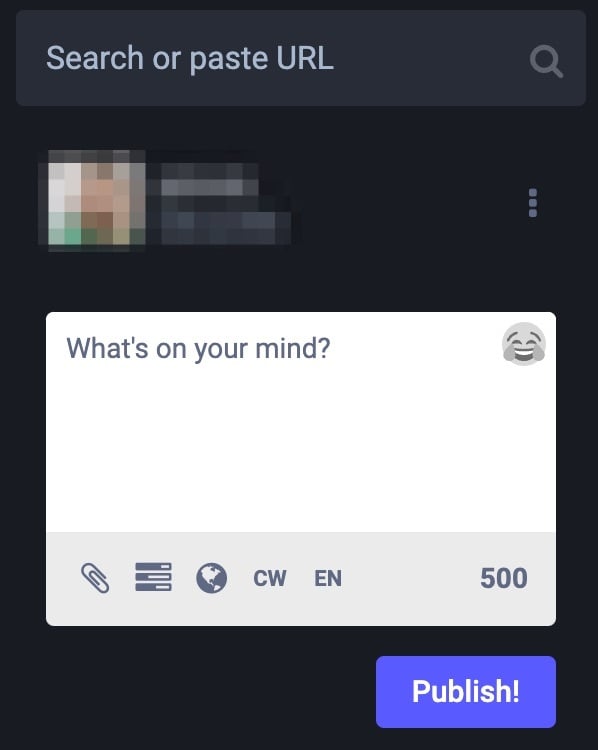 Is Mastodon safe for all users?

The problem with Mastodon being decentralized is that every server has its own set of rules, which makes content moderation subjective to the admins of that server. Mastodon’s “Server Covenant” says it only links to servers that have “active moderation against racism, sexism, homophobia and transphobia,” but how that is interpreted and moderated ultimately comes down to the server.

This means your experience interacting on the platform will differ depending on which server you choose because they don’t all share the same codes of conduct. In fact, people of color have reported instances of hate speech on the app.


And posts talking about racism and larger systemic issues have been falsely interpreted as violating rules of conduct. Some users have also reported being asked to add content warnings to posts about social justice movements.


In an interview with TimeMastodon Founder Eugen Rochko says if hateful people do set up a server, Mastodon puts the power to deal with hateful content in the hands of its users. “I guess you could call it the democratic process, the hateful server can get ostracized or can get split off into basically, a little echo chamber, which is, I guess, no better or worse than them being in some other echo chamber.”

Earlier this week, journa.hostthe server I joined, faced accusations of transphobia for suspending the account of trans journalist Parker Molloy for violation of the server’s rules. In a Mastodon thread postMolloy acknowledged that amid a heated exchange they broke the community’s guidelines and “lashed out” at another user and the journa.host mods. Once their account was reinstated, Molloy asked people to “give [the server mods] a bit of time, to judge them on their actions moving forward rather than actions of the past.”

If Mastodon wants to replace Twitter, we’ll have to ruin it first


Clearly, Mastodon is not immune to content moderation issues that plague all social media platforms. However, Mastodon might be more equipped to resolve such issues. In the same thread post, Molloy said they’d spent an hour talking with Adam Davidson, one of the moderators of journa.host. “It was a very good, very productive conversation that I’m very glad to have had.”

Yes and no. Mastodon is by no means a panacea for toxic Twitter. Social media inherently reflects all aspects of our society; the good, the bad, and the ugly. Social media changes when society changes. But unlike Twitter, which is about as impersonal as you can get, the resolution between Molloy and Davidson was human and civil. Would that have happened if this conflict unfolded on Twitter with thousands of others potentially inserting themselves into the conversation?

Personally, using the platform feels more personal, and that’s a good thing. The success or failure of a server lies in the hands of its community, and it’s a comfort to know that the stakes are the same for its moderators.

That being said, most people joined Mastodon as a reaction to the Twitter fallout, so it feels a little bit like an anti-Twitter echo chamber of users on their best behavior. Maybe it’s because I’ve seen the rise and fall of too many social media apps, but it feels too good to last.

Mashable’s Christianna Silva has a similar take. “It’s only enjoyable if you’ve forgotten the rise or slow, stuttering fall of every other social media platform in the last few decades.”