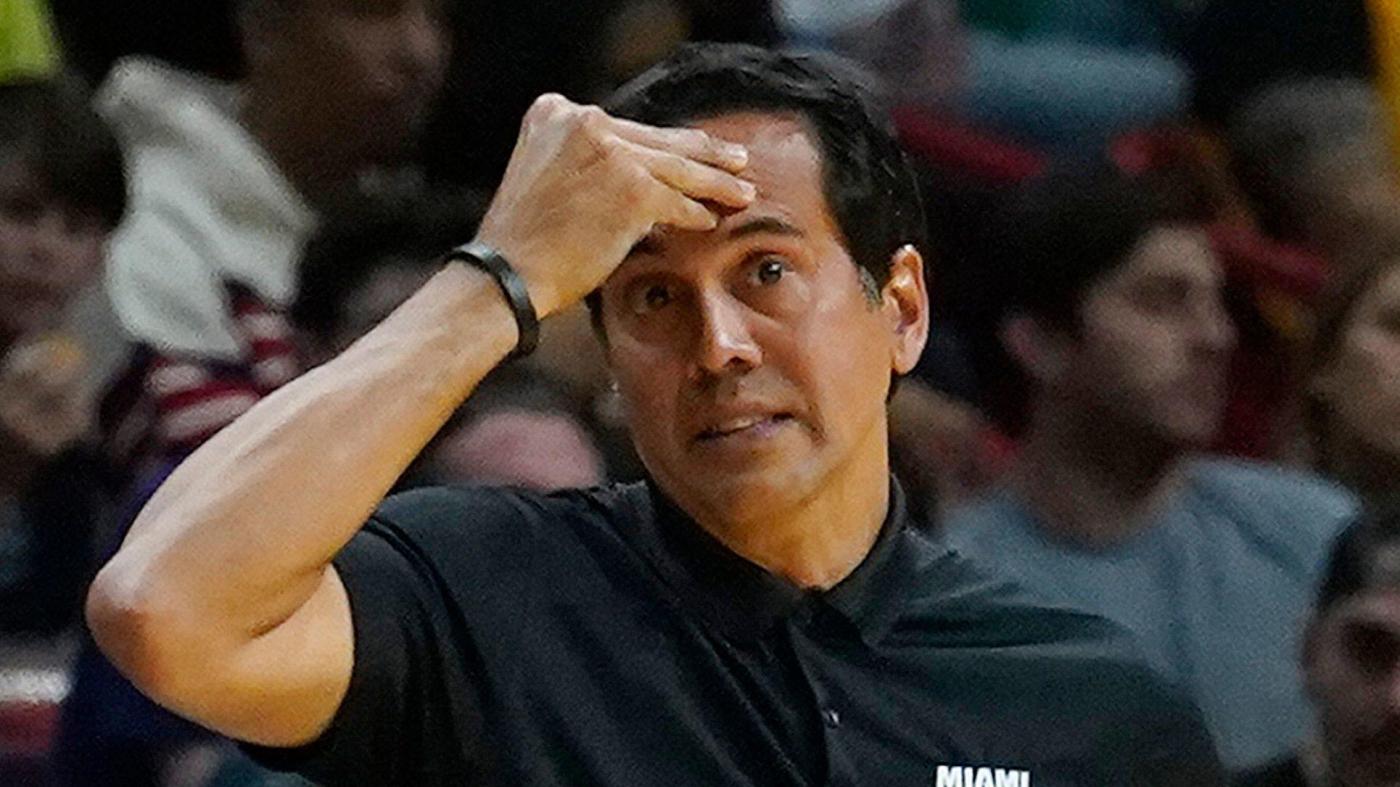 The franchise of “we have enough” tends to be more focused on making do with what is available and making inroads from there.

But after an 0-4 trip that featured three crushing tight losses and one sobering blowout defeat, coach Erik Spoelstra essentially issued a call to arms — and knees, and ankles, and other ailing body parts — after Monday night’s loss to the Minnesota Timberwolves that dropped his team into 12th place in the Eastern Conference at 7-11.

No, he wasn’t naming names, at least not those who have been out injured. Those he chose to address by name were those who had lined up for extra minutes or unexpected minutes as the Heat continually scrounged during the trip to fill spots on the active roster.

No, as he sat in the interview room at Target Center after Monday night’s loss, he instead was seemingly making a plea to those who have been erring on the side of caution, with Tyler Herro skipping the trip due to an ankle sprain and Jimmy Butler leaving during the trip due to knee pain.

In fact, of all the injuries that sidelined up to nine of the roster’s 16 players at times during the trip, only center Omer Yurtseven, with his ankle procedure, was the lone member of the roster sidelined by a surgical injury.

“At some point, hopefully we’ll be getting some guys back,” Spoelstra said, with the Heat next to host the Washington Wizards on both Wednesday and Friday nights. “Even if they’re not fully 100 percent, even if they’re close enough, maybe they can give us a little bit of reinforcement, even if it’s just short minutes.

“That’s where we are right now.”

For a team that emphasizes featuring players at their best, these are different times, yet to stand above .500 at any point this season.

No, Spoelstra did not directly say it was time for Butler to return, for Herro to be back in uniform.

Instead, he spoke in what came off as pointed generalities.

During the trip, Bam Adebayo, Dewayne Dedmon and Duncan Robinson all pushed back from injuries. Gabe Vincent tried to do so nightly, as well. All while the burden continued to mount on 36-year-old point guard Kyle Lowry, who was asked to go 44:42 Monday night on the second night of the back-to-back set that opened with Sunday night’s blowout loss in Cleveland.

“That’s admirable and inspiring to see guys do that.”

As it is, the Heat have not had Butler, Herro and Adebayo together in the same game since the Nov. 1 home victory over the Golden State Warriors.

“We will get better from it,” Spoelstra of the unrewarded perseverance over the past week. “I promise Heat Nation that.

“It was this close on this road trip to being something special with all the guys out. Just weren’t able to do it. So we’ll rest up and get ready for what is next.”

Listed as probable are Adebayo (knee) and Haywood Highsmith (hip).

That is 10 of the 16 players under contract, with the only players not on the injury report being Lowry, Orlando Robinson, Caleb Martin, Udonis Haslem and Nikola Jovic.

With Strus out, it would leave Lowry as the team’s lone player not to miss a game this season.