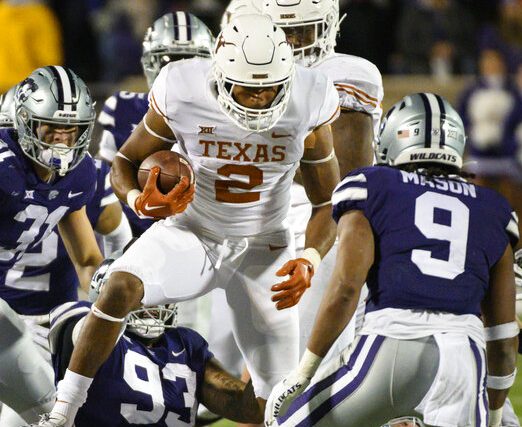 AUSTIN (KXAN) — The biggest name on almost every football team is the quarterback. After that, it may be a star wide receiver or an intimidating defensive player. It’s rare to have one of most well known players not be a starter, but that’s the case for Texas.

The Longhorns backup running back Roschon Johnson has been as instrumental as anyone around the team, just ask those around him.

“He just means so much to this program, his leadership,” noted Longhorns Junior Running Back Bijan Robinson. “Just him as a person and how he handles himself. That’s what it means to be a great football player but a great person.”

Johnson came to Austin as a highly-touted quarterback, but just before his freshman season the previous regime had him switch positions because of injuries in the backfield. It wasn’t until during his junior season that Johnson said he officially felt like a running back.

Now the Port Neches native is in his fourth year in burnt orange, having played in every game over his time with the Longhorns. As a senior getting consistent playing time, the journey hasn’t been smooth but it’s one that’s molded him.

“I’ve enjoyed every bit of it,” said Roschon Johnson. “The challenges. Every aspect of it. Just from my story and how my career played out through my time being here up until now has been a lot of ups and a lot of downs, but I’m grateful for it all.”

The Texas football team often talks about how important their player leadership is, but when they have to point to a specific leader, it’s always Roschon Johnson. That’s no different with the head coach.

“When you talk about what is a Texas Longhorn football player, in my mind I think of Roschon Johnson because he is a selfless player,” said Longhorns Head Coach Steve Sarkisian. “He is not the star or starting running back at the University of Texas, but yet that doesn’t ever get in the way of his work ethic.”

Johnson maintains one more year of eligibility because of the Covid-shortened 2020 season, but does say he considers himself a senior as of now. He has accepted an invite to the 2023 Reese’s Senior Bowl on February 4, 2023.