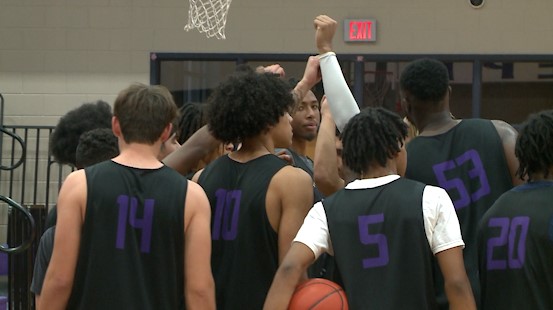 When Dan Miller came to be the head coach of San Marcos boys basketball before the 2021-2022 season, he didn’t quite know the talent he was about to have in the program.

The Rattlers sit at 28-2 and are ranked No. 9 in the state of Texas in the latest TABC poll. A number of San Marcos’ games have been close, going down to the final possessions.

Handling adversity has been the name of the game this season for San Marcos. One of their veteran leaders, senior guard Kaden Gumbs, missed the first 21 games of the campaign because of a Lisfranc injury.

“I wasn’t surprised,” said Gumbs about his team still playing very well in his absence. “I know my team. They’re really good. We got talented players.”

Gumbs’ longtime teammate and friend Malik Presley had a health scare of his own before the season. Presley had a ruptured appendix which left him in the hospital for days but was still ready for the start of the season.

“That was the first thing I asked was if I could play and how soon can I be back,” said San Marcos Senior Forward Malik Presley about his reaction to the injury. “My coach, my teammates, my family and the whole community of San Marcos, they did a great job supporting me and keeping my spirit high.”

Presley remains uncommitted but has offers from Texas, Houston, Arizona State and others. Gumbs will remain in San Marcos to play with Texas State at the next level.

The two are the leading scorers for the Rattlers and have clear chemistry on the court. They have competed often with a number of one-on-one games.

“I’m not going to lie, Malik has won most of those games,” said Gumbs with a smile. “But it’s never easy.”

“Kaden is the best player I’ve ever played against probably,” said Presley. “Kaden consistently guards me the best more than anybody on the team. I’ve feel like we’ve grown up together so he knows most of my moves.”

Gumbs, Presley and the rest of the team are open about their desire to make some history in San Marcos. They will aim to win the Rattler’s first playoff game in eight years as they work to leave their mark.