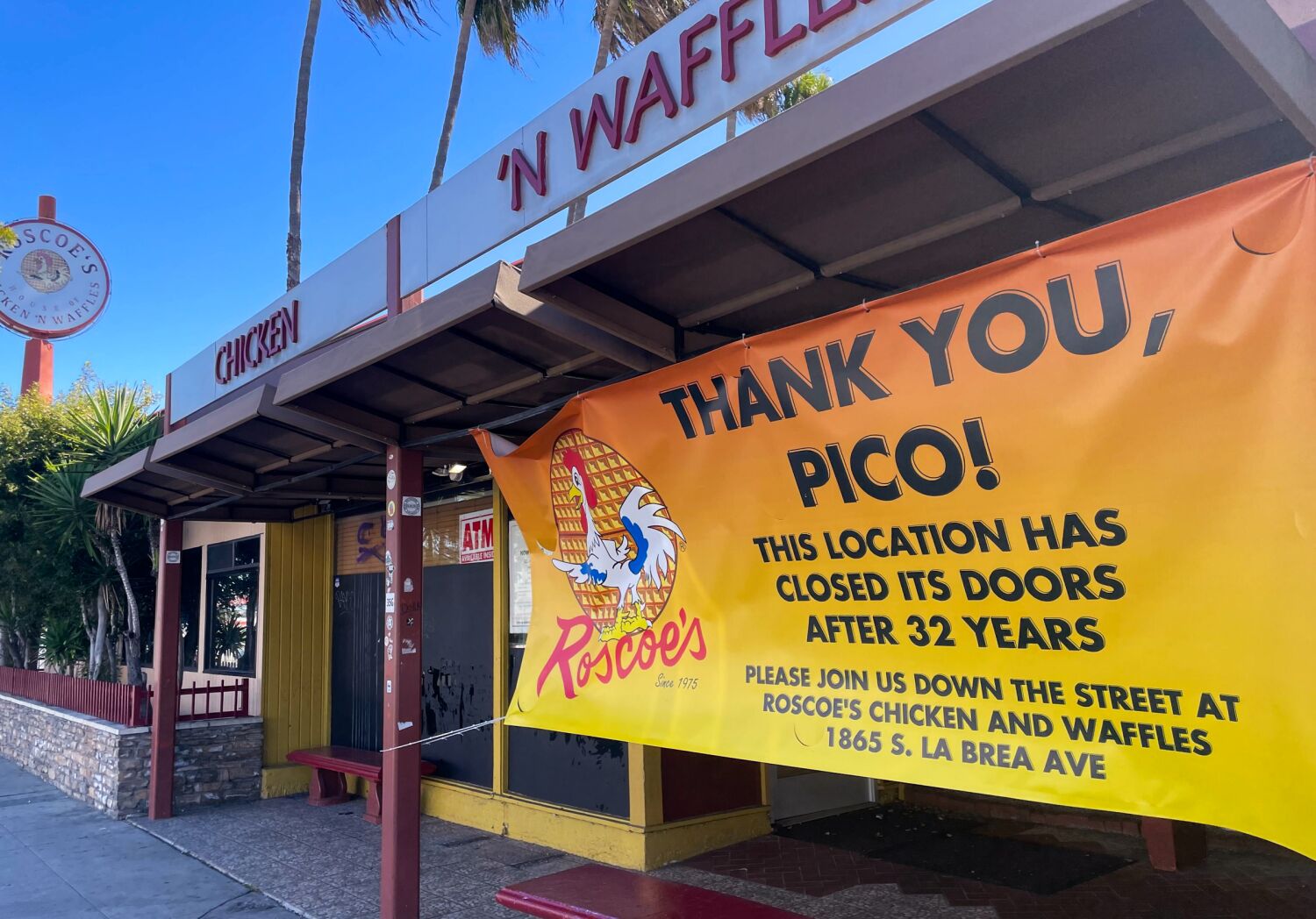 One of L.A.’s most iconic restaurants has closed — but that doesn’t mean there isn’t still fried chicken at Roscoe’s. Over the weekend Roscoe’s House of Chicken ’n Waffles announced the closure of its Pico location, one of the longest-running outposts of a chain synonymous with Los Angeles soul food. The pink-neon-lit, wood-ceilinged Mid-City restaurant operated at the corner of West Pico Boulevard and South Mansfield Avenue for 32 years and fed the likes of President Barack Obama and Snoop Dogg in addition to countless politicians, actors, pro athletes, models, musicians and other celebrities.

A bright yellow and orange banner now hangs out front, thanking the community for its decades of support. Online and in person, the restaurant’s legions of fans are mourning despite the seven locations still open in the L.A. area, including a storefront that opened on La Brea in 2021 roughly half a mile away. Though founder Herb Hudson’s first Roscoe’s was planted in Long Beach in 1975, the Pico outpost proved one of the most iconic for the chain. Pico, to many, was special.

Michael Tillman, 67, approached the entrance, where security guard Gregory Ray greeted him with a flier depicting a map to the La Brea restaurant.

“New location?” he asked in shock.

Since moving to Fort Worth, Tillman has made time to dine at the Pico location during every visit to his sons in L.A. “It just kind of keeps the memories alive to come back and revisit this,” he said. “I know where the other one is, but I’ve never been to that one. I’ll probably go there right now, and keep going.”

Ray, 54, stood in the uncharacteristically empty parking lot to direct guests to the La Brea restaurant. Before today, Ray worked for the company as a parking attendant across its many locations for three years. What made the Pico Roscoe’s the best? “The customers that have been around just as long as it’s been around,” he said.

“We have continued to bring classic chicken and waffles to many communities at our different restaurant locations and will continue to do so,” the chain’s announcement read on Instagram, accompanying a slideshow of photos, a rooftop concert and celebrities from the last three decades. “Thank you for your loyalty and support over the years, we look forward to serving you at one of our other 7 locations around the greater Los Angeles area. #LongLivePico.”

Representatives of Roscoe’s Chicken ’n Waffles did not respond to requests for comment regarding the closure, but they told Eater L.A. in 2016 that the Pico location would close given the chain’s expansion to nearby La Brea.

Employee Dwight Davis welcomes the change, and confirmed that staff knew the closure was coming in favor of the La Brea location — but not when. Davis, who has worked at Roscoe’s for 24 years, learned the news along with customers on Thursday and spent his final day on Pico making new memories, taking pictures with customers under the pink neon. The motivation for the move, he says, was to operate in a building that was owned, not rented; those concerned by the closure should know that the chain is not downsizing. In fact, he says, it’s still on track to open new locations in San Diego, Palm Springs and the Bay Area.

Davis also relayed a statement from owner Herb Hudson that credits Roscoe’s as one of the rare businesses that appealed to “all walks of life and they’re all sitting next to each other in this Los Angeles.”

Online, fans have reacted to the news on social media with memories of growing up visiting the Pico location; gifs of pouring some out; their favorite celebrity sightings; and their first meals there upon moving to L.A. Others questioned the decision to close Pico while maintaining the Manchester location, the site of the shooting of rapper PnB Rock last year. (The Pico location suffered its own gun-related incident the following month: an armed robbery in the parking lot.)

More happily, many recalled President Obama’s 2011 visit to the Pico outpost and the way it altered the chain’s menu. Then called the “Country Boy,” Obama’s order of three wings with a choice of waffles, fries or potato salad has since been known as Obama’s Special; he later detailed the visit as a guest on Jay Leno’s talk showlaughing about the smell of wings in his limo and trying to remove a spot on his tie from the meal before walking into a fundraiser.

During his run for president Joe Biden campaigned at that location, bringing one of the world’s most prominent Obama-adjacent actors with him. Comedian Keegan-Michael Key — who famously played Obama’s “anger translator,” Luther — offered, in his best Obama cadence, to be Biden’s running mate in a video geotagged to the restaurant.

“If I said we were going to Roscoe’s, that was the one we were going to,” said lifelong fan Na Nisa Batiste. She recalls being a 10-year-old tagging along there with her cool older cousins and friends in the early ’90s. “It’s such a staple in my childhood: going there on Saturdays, going there when I got older and became a high school student at Crenshaw.” In her teenage years, she would occasionally sneak off campus for lunch with her friends at the restaurant.

Batiste, now 37, says her go-to order is still the No. 9 — the Obama’s Special. Thankfully she can still find it at Roscoe’s around town, but the weekend’s closure of the Pico location proved a reminder: It inspired her to patronize her favorite childhood spots more often, while she still can.

“I think we took it for granted. That place has always been there, as far as I’ve known,” Batiste said. “I would have never imagined that location would be closing.”