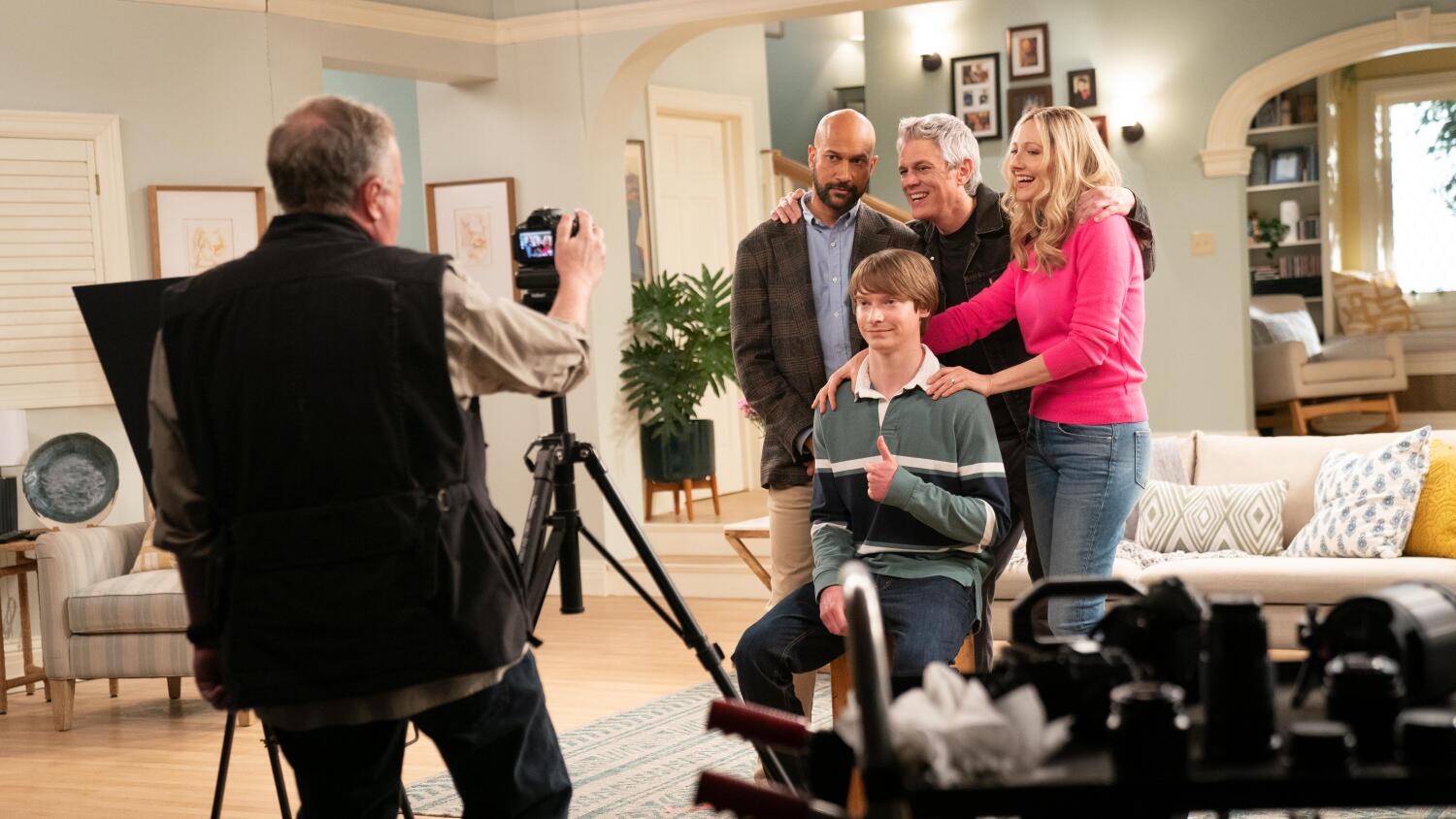 The sitcom isn’t a dying format, it just needs a reboot. And that’s exactly what Hulu has done with “Reboot,” a meta comedy about an effort to revisit a fictitious show from years past. Keegan-Michael Key, Judy Greer and Johnny Knoxville star as the core of the reunited cast dealing with past and present baggage. The series is produced by Emmy Award-winning showrunner Steven Levitan (“Modern Family”).

An Emmy winner himself for “Key and Peele,” Key has taken home his share of hardware through the years. But for him, this show is a career standout. “I would really love to see some of us being nominated,” he tells The Envelope.

Judy Greer has a boatload of nominations, including one from SAG for “Descendants.” But if she doesn’t get recognition for “Reboot,” “my heart would be broken,” she jokes. Here she joins fellow castmates Key and Knoxville for a look at the sitcom behind the sitcom.

It looks like you’re having a blast making this. Can you tell by the vibe on set how the finished product will look?

Keegan-Michael Key: You can never, ever tell. There is no science to this. It’s the most anxiety-inducing part of our job.

Judy Greer: I was in a Mike Nichols movie that was bad. Like, c’mon.

Greer: Exactly! Everyone has one. I’m usually in it. But it was crazy, because you’re making the movie, and you’re like, this is a slam-dunk because it’s a Mike Nichols movie. And then it bombs. [The film was] “What Planet Are You From?”

The scene where you sabotage the pretty ingénue played by Alyah Chanelle Scott, ever experience anything like that?

Greer: Someone could have been trying to sabotage me and I didn’t notice.

Key: I don’t need anyone to help me sabotage myself.

Greer: Yeah, they probably started and said, “Oh, this girl can do this on her own.”

Johnny Knoxville: I’ve been on a film where an actor that I have every scene with was, for the first three or four weeks, trying to sabotage me every point of the way, interrupting the cast read-through when I was reading with him. He’s like, “Where’d you get this guy!?!” And I already thought I was getting fired because it was the first film I ever got, and it was a lot of big actors in it. But a year later the director told me he took that actor aside and said, “If you don’t step it up, you’re getting fired.” I was like, “I wish you had told me that then.”

Judy, you have that moment where you screw up in front of the press. That ever happen in real life?

Greer: Every time I do an interview I’m regretting half of what comes out of my mouth. That will happen today when we’re done with this.

Knoxville: I’ve done quite a few interviews with her, and I get it.

What does showrunner Steve Levitan bring that others don’t?

Key: He’s very adept at writing good standard situations for the situation comedy and peppering good, hard jokes in there — what I like to call Norman Lear jokes, actually, jokes with setups and punchlines. And at the same time he has a wonderful quality of infusing everything with heart. “Modern Family,” that was always my favorite part — the heart, because it catches you by surprise.

Judy, your character sits in on the writers room. Ever been tempted to do that?

Greer: Not me, I don’t want to go in the writers room. I like to complain after the fact, when I get a script.

Knoxville: You do a lot of complaining before, too. But if we have any ideas, you run them by Steve.

Greer: I don’t think I would add a lot to the story-making process. But I think a lot of actors are like, “I could have thought of something better!” I did go into the writers room one day just to introduce my dog to Steve.

In the show, your showrunner played by Paul Reiser is fraught with personal distractions. Ever have a situation like that?

Greer: I’ve had that happen, and it’s f—ing terrifying. Like, on the third episode your showrunner comes to you and says,”‘Do you have any ideas at all? The well is drying up.” I’m like, “The well is drying up? You have a room full of professionals? Why are you even on set right now?” And surprisingly enough, the show was canceled.

Key: Someone once said to me, if for some reason you know the showrunner is having domestic issues and you’re in the writers room, you’re not going home. They’ll start to rewrite because they want to stay there.

Have you heard anything regarding a second season?

Knoxville: I’m doing this show with Eric André and we’re on set one morning and he shows me a thing on his phone and it says “Reboot” has been picked up for the next season. I’m like, oh, that’s cool. I go back to my room to look it up. No, he just had that drawn up.

Greer: My friend said, “Wouldn’t it be so meta if you didn’t get picked up? That would be the most meta thing about ‘Reboot.’”

Key: That’s so funny. Don’t ever say that again.