When some ‘frugal and adventurous fans’ booked affordable and nice-looking rooms in Qatar for their FIFA world cup trips, they were in for a surprise when they finally arrived at the location.

Their rooms – which looked fine during the booking, with an AC, fridge and other amenities – were essentially shipping containers.

A report by the New York Times provided a peak inside the affordable ‘sets of rooms’ that Qatar authorities have provided for fans looking to witness the action of the World cup, without spending too much on fancy hotels that the country is known for.

Sheng Xie, a 33-year-old soccer fan from Vancouver, British Columbia, described his experience to the publication. Using the official tournament website, he had found a reasonably priced hotel called Fan Village. The room depicted appeared to be functional and clean. For about $200 per night, there were two twin beds, Wi-Fi, air conditioning, and a refrigerator. Gihana Fava and Renan Almeida, soccer fans from Brazil, head for their rented room after checking in at Fan Village at the World Cup in Doha, Qatar, on Nov. 22, 2022. Fan Village is a sea of shipping containers converted to sleeping quarters, stretching almost as far as the eye can see. (Erin Schaff/The New York Times)

He had no idea it was basically inside a shipping container. “What did I book?” Xie wondered to himself in recent weeks as he began to see photos of his accommodations under construction on social media.

When he arrived, he discovered a sea of colourful metal boxes, neatly lined side by side in neat rows, lettered and numbered, stretching about as far as he could see. His container/trailer was one of thousands that had been hurriedly erected in a dirt field near the airport. Workers estimated that there were 4,000 of them. A map at the entrance showed plans for over 7,500 people, plus a section for employees. It reminded him of a ‘one-story Lego town,’ the report stated. A shopper at a grocery store at Fan Village at the World Cup in Doha, Qatar, on Nov. 22, 2022. Fan Village is a sea of shipping containers converted to sleeping quarters, stretching almost as far as the eye can see. (Erin Schaff/The New York Times)

Xie found his room, in section E8, behind a metal door, down the well-lit acres of artificial turf laid atop the pebbly soil; past the giant tent that serves as a dining hall, the big box that houses a grocery store, and all the little boxes that sell food or coffee or pharmaceuticals or fan gear; and not far from the outdoor gym and the soccer-field-size spaces where people can gather to watch soccer matches on a big screen.

It looked exactly like the picture on the inside. The air conditioning kept the room cool enough, and the Wi-Fi was functional. There were two small windows to let some light in. He was relieved to learn that the doors had been locked.

Qatar has a population of only about 3 million people, and fans from all over the world who are crammed into Doha’s World Cup stadiums for four games a day must find somewhere to stay. Most found hotels, and Doha has a plethora of high-end brands. Others reserved seats on one of the docked cruise ships brought in for the event.

However, for many fans, particularly those who are more adventurous or frugal, the somewhere they found is in a field that feels mostly like nowhere, the New York Times report explained.

After all, Qatar knows how to construct vast swaths of utilitarian housing for temporary residents. The dusty outskirts of Doha are teeming with sprawling neighbourhoods like this, with names like Asian Town and the Industrial Area, that serve as permanent encampments for the migrant workers who do the majority of Qatar’s construction and service work. The concept appears to have been used by World Cup organisers as a solution for fans. 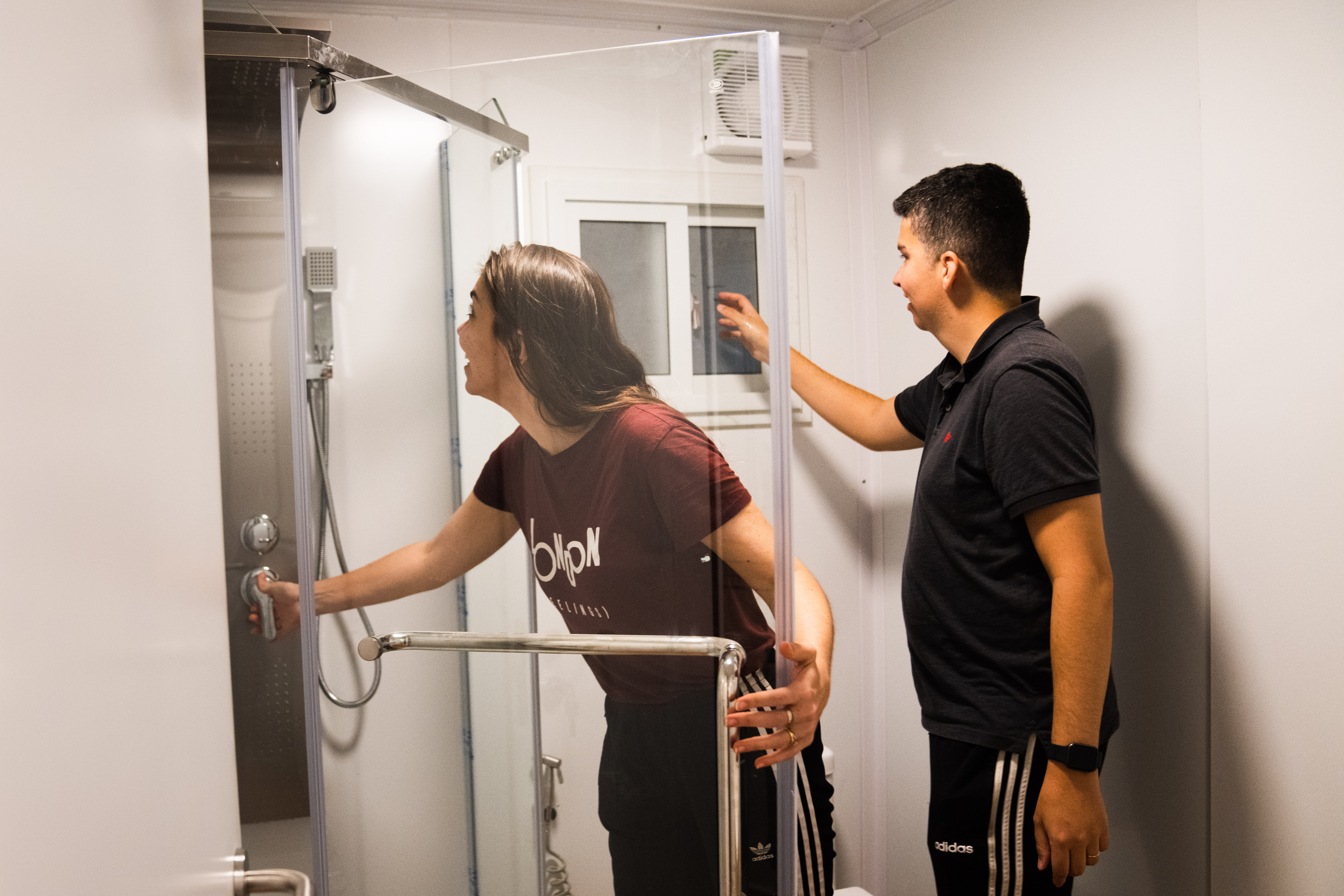 Gihana Fava and Renan Almeida, soccer fans from Brazil, react as they find the hot water working in their rented room at Fan Village at the World Cup in Doha, Qatar, on Nov. 22, 2022. Fan Village is a sea of shipping containers converted to sleeping quarters, stretching almost as far as the eye can see. (Erin Schaff/The New York Times)

Not every option was as boxy as a properly appointed shipping container. The concept is “Arabian camping” at Al Khor, a more upscale fan village located a 40-minute drive north of central Doha near the beach. Visitors are housed in canvas tents outfitted with furniture, plumbing, televisions, and refrigerators. There’s a pool, a restaurant, pop-up shops, and a “fun zone” with a large fire pit and big-screen televisions. This week, advertised prices exceeded $400 per night.

With inputs from New York Times