Launched in 1993, Jet Airways emerged as one of the most popular airlines for the Indian air passengers in a short period — before collapsing under a mountain of debts and finally suspending operations in 2019.

New Delhi: Private carrier Jet Airways has been displaying a lacklustre performance in the stock markets with its share price down over 15 per cent in three consecutive trading days. As of 23rd November, 2 PM, the share price of Jet Airways (India) Ltd stood at  ₹65.55 — 17.86 per cent down in the last 5 days (3 trading days). 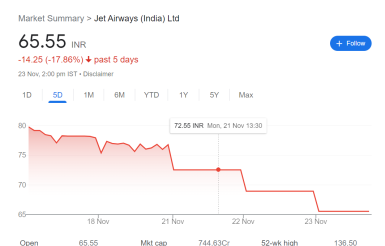 There has been a 45 per cent decline in the share price of Jet Airways in the last six months. 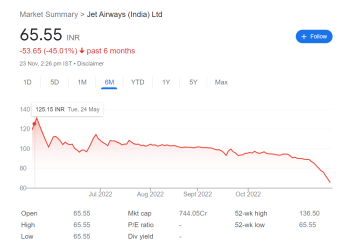 Several developments that have occurred in a span of 1-2 weeks can be attributed to this fall in Jet Airways’ share price. According to reports, the Bureau of Civil Aviation Security (BCAS) on Wednesday withdrew the accreditation given to Jet Airways’ aviation security training facilities while last Monday, the airline temporarily cut the salaries of some staff by up to 50 per cent and some were sent on leave without pay.

“The competent authority has revoked the accreditation granted to both the Aviation Security Training Institutes (ASTIs) of Jet Airways at Gurugram and Mumbai. The airline may apply afresh for approval of its ASTIs as and when it is ready for inspection…,” BCAS said in a communication.

Launched in 1993, Jet Airways emerged as one of the most popular airlines for the Indian air passengers in a short period — before collapsing under a mountain of debts and finally suspending operations in 2019.

Despite it being an year-and-half after the NCLT approved the resolution plan, the Kalrock-Jalan consortium is still yet to pay lenders.  According to an ET report quoting sources, frustrated lenders are forcing Jet Airways into liquidation as they consider selling 11 aircraft while the resolution process remains slow.

According to reports, the Jalan Kalrock consortium has emerged as the winning bidder for the bankrupt airline through an insolvency resolution process.