Bitcoin’s [BTC] rally for most of January may be due to many factors, but one part that could not be ignored was the increasing presence of institutional investors. While this is not to downplay the retail impactgrowing institutional participation contributed massively to the activities in the futures market. This was the outcome of Arcane Research’s “Ahead of the curve” market update.

The return of the big wigs

One significant part that proved institutional authority was the Chicago Mercantile Exchange (CME) Open Interest (OI) in the futures derivatives market. The CME is a global derivatives marketplace operated by the world’s largest operators and used mainly by institutions for options and futures trading.

According to Arcane, the CME was only 21% away from breaking its All-Time High (ATH) since it went negative during the FTX collapse in November 2022.

The last time the OI was this high was in October and December 2021, when the market was still filled with greens. Besides, BTC futures ETFs launched around this period. Hence, it also contributed to the hike.

As the OI in this regard surged, Arcane pointed out:

“While ETF flows remain stale, CME’s open interest is surging. The growth is caused by increased direct activity as the non-ETF contribution to CME’s OI has grown from 40% to 53% so far this year.”

The surge also impacted the cumulative exchange in BTC’s futures open interest. However, there were some downturns. For instance, BTC stored in offshore exchanges declined by 18.6%. This might not be surprising, as the spike in institutional futures and options trading meant that a large volume would have left the reserves.

Funding rate stays neutral but BTC volatility is at the pinnacle

Despite the OI heights, the digital assets research firm noted that it was different from the funding rate. Although the metrics have had its crests and troughs, the overall sentiment mostly stayed neutral.

According to the 24 January Arcane report, the average funding rate was 0.05% on the Binance and Bybit exchanges. However, Binance’s funding rate at press time was down to -0.01% per Santiment date. Indications from the on-chain analytic provider showed that it only fell from the Arcane figure on 25 January.

As the implied volatility rose above 60, so did the realized volatility accompanying it. This implied that there were grounds for notable price changes resulting in gains or losses. But with the skews resisting negativity, the volatility provided bullish tendencies. 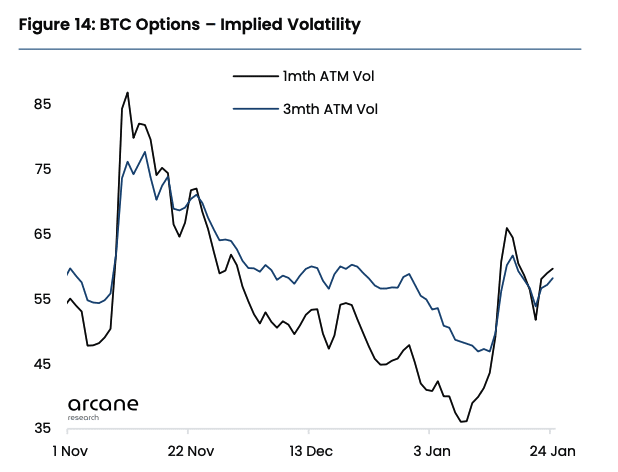 Nevertheless, investors might need to slow down their optimism about BTC’s bullish traits. This was because of the controversy rocking the Gemini exchange and the Genesis bankruptcy filing.