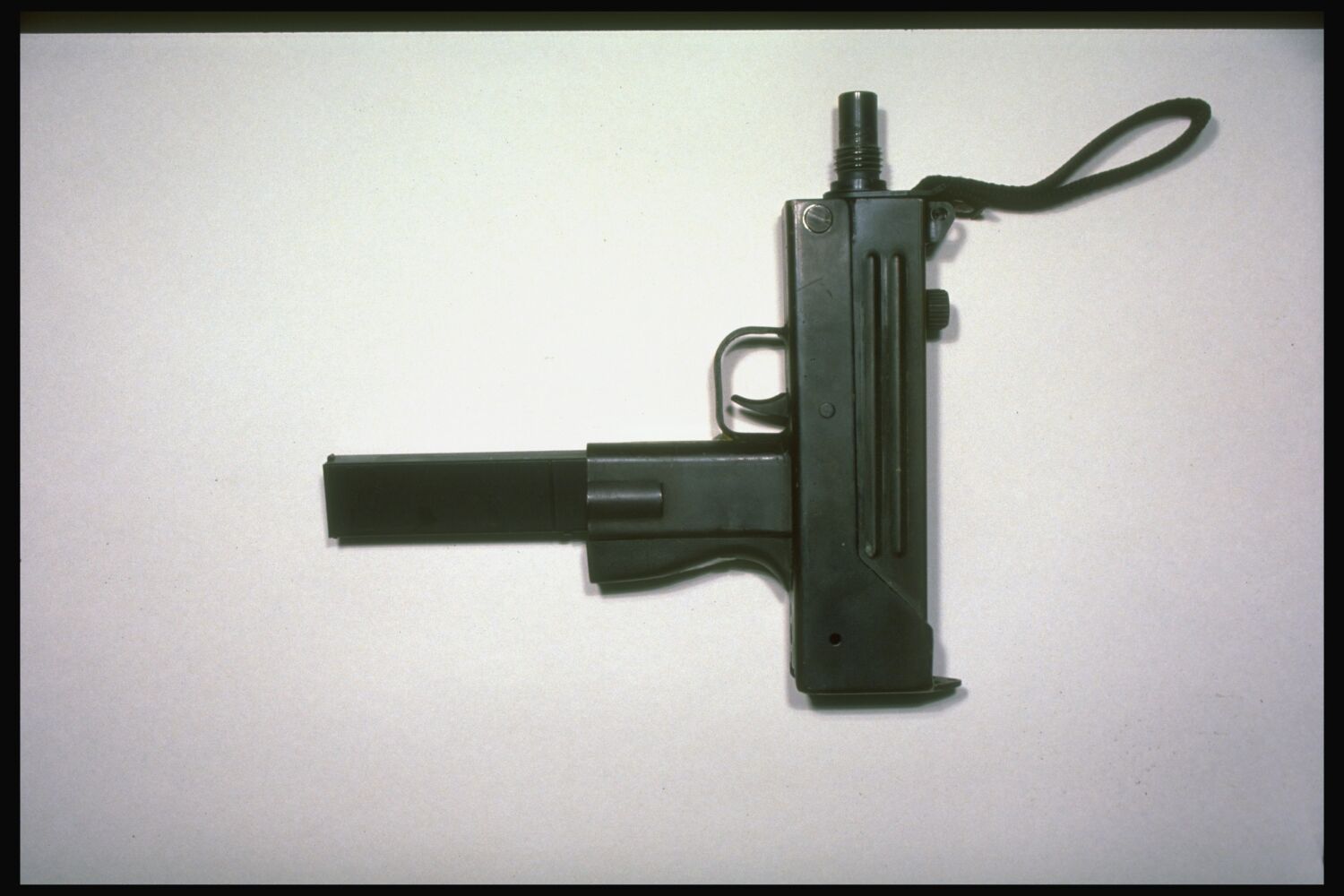 As familiar as mass shootings have become, the gunman’s choice of weapon in the attack Saturday night that left 11 people dead and nine injured in Monterey Park stands out.

Instead of the assault-style rifles that have surfaced in recent high-casualty shootings, authorities say, Huu Can Tran carried a 9-millimeter MAC-10 — a relic by today’s standards — when he walked into a dance hall about 10:20 p.m. and began spraying bullets as frightened patrons ducked for cover. Authorities recovered at least 42 spent shell casings from the scene.

At a news conference Monday afternoon, Los Angeles County Sheriff Robert Luna said the weapon was wrested from Tran at a dance club in Alhambra and provided law enforcement with the first clues to the gunman’s identity.

The gun, which was used with an extended magazine, is generally illegal in California. Luna said investigators also recovered a Norinco 7.62 x 25 semiautomatic handgun registered to Tran from inside a white van where the 72-year-old was found dead from shooting himself.

As authorities continue to comb Tran’s background for a possible motive, Luna said his agency has been working with the Bureau of Alcohol, Tobacco, Firearms and Explosives to determine the guns’ origins.

“It’s part of the puzzle that we’re trying to put together,” he said.

The MAC-10 is unmistakable, having shown up in countless action movies and TV shows from the mid-1970s into the 1990s. It resembles a compact version of a machine gun but is considered semiautomatic, firing one bullet with each squeeze of the trigger. Although the weapon was frequently wielded on-screen by John Wayne, Arnold Schwarzenegger and others, in the real world it is considered more of a show piece due to its poor aim and reputation for jamming.

The version that Tran was carrying had been modified, Luna told reporters on Monday, without offering further details.

James Densley, a criminal justice professor at Metropolitan State University in Minnesota, said the gun evokes images of violent crime in the 1990s, but has rarely been used in mass shootings.

Densley and Jillian Peterson, a professor at Minnesota’s Hamline University, started a database of mass shootings, called the Violence Project. The archive dates to a 1966 attack on the campus of the University of Texas in Austin, considered the first modern mass shooting. It uses the academic definition of a mass shooting as an incident in a public space with at least four fatalities.

By that measure, Densley said, the preferred weapon among mass shooters in recent years has been an AR-15-style rifle, which was used in a third of the 66 such attacks in the U.S. between 2012 and 2022. In the prior half-century, he said, the high-powered weapons had been used five times.

Such rifles have become the norm in part, he said, because they are “ a kind of utility of weapon; they are lethally efficient and they can be modified.” Research also suggests a “contagion effect,” in which mass shooters are likely to copy previous attackers, down to the type of firearm used, he said.

“Our failure to deal with mass shootings as a society normalizes that form of violence, and I think that’s why we see this happening with increased regularity,” he said. “Mass shootings have become so frequent that we are telling the world that this is just a part of everyday life. We’ve normalized it. And that means that when people are feeling disgruntled they can turn to violence because there’s models for that behavior.”

Experts on firearms and shooting tactics described Tran’s decision to use a MAC-10 as unconventional, as opposed to the semiautomatic rifles more commonly associated with mass shootings in America.

The firearm Tran used would be easier to conceal than a long rifle and is more effective at a shorter range. That might have been a factor if Tran was known to his victims and believed he could get close to them without raising alarms, said Ed Obayashi, a Plumas County Sheriff’s Department deputy with a background in police use-of-force and shooting tactics.

“Its concealability and rapid rate of fire make it popular,” Obayashi said. “It would have been very, very easy to conceal that weapon in a coat, and all it takes is one hand to fire.”

Surveillance images have shown Tran wearing a puffy jacket when he entered a second dance hall in Alhambra, where he was disarmed by 26-year-old Brandon Tsay.

Thor Eells is a former SWAT commander for the Colorado Springs Police Department who serves as the executive director of the National Tactical Officers Assn. He said the weapon is best used to repel attacks, due to its high rate of fire and effectiveness in close quarters. Eells compared the weapon to an Uzi submachine gun, which can fire more rounds per minute than an AR-15.

The MAC-10 lacks the power of an AR-15, which fires rifle rounds that tend to cause more “catastrophic” injuries, Eells said, and is harder to aim.

“It’s not easy to shoot accurately … that’s a lot of rounds going through a weapon so to control it is more difficult,” he said. “Unless you have some degree of weapons skills, you’re probably not going to opt for that as a first choice.

“It strikes me as being unusual that this is the weapon that he chose given all the other types of weapons that would have been available for him to use in this type of scenario,” Eells continued.

Eells and Obayashi said it would not be uncommon to see a MAC-10 with an extended magazine capable of firing 30 rounds before needing to be reloaded.

Steve Gordon, a former LAPD SWAT officer and weapons expert, said this type of semiautomatic 9-millimeter pistol with extended magazines has an early ’80s feel and called it “a poorman’s Uzi.”

“The only people who used them years ago were gangsters,” he said. “It is designed to [do] close-quarter battle in a house or building and [use a] massive amount of rounds.”

Gordon said the type of weapon was popularized by its looks rather than its performance. It is decidedly heavier than others. These types, however, do have the ability to attach very large magazines, which allows a user to shoot continuously for longer periods.

“It was more of a novelty gun, to blast at the range and to show friends,” he said. “No real firearm-experienced people took the gun seriously. It was not accurate. Poor sighting system, heavy and unreliable. It could only really be used to cause maximum damage at a short distance.”

Densley, the college professor, said the increase in such shootings comes as record gun sales during the pandemic have placed more firearms into circulation, some of which are lost, stolen or sold and otherwise end up on the black market.

“So it’s like a mathematical problem in some degree. It’s like the more guns there are in circulation, the more chances there are that they’re going to fall into the hands of someone who shouldn’t have them,” he said.

While authorities have released little information about the motive of the Monterey Park shooter, Densley speculated whether he picked his weapon more out of convenience than firepower.

“If this is a 72-year-old who doesn’t have an extensive history of violence and perhaps wasn’t planning on perpetrating a mass shooting in a traditional case, it might just be a case of a firearm that was available and affordable,” Densley said. “Sometimes it’s whatever is kind of available that people will use. We see this with school shooters. Shooters will generally get their firearms from home, because they are too young to buy guns on their own.”

While the exact cause is difficult to “disentangle,” Densley said there’s no question that mass shootings have increased recently, with 7 of the 10 deadliest shootings having occurred in the past decade.

“The stressors of the pandemic may have exacerbated some of the risk factors of mass shootings,” he said, which has coincided with a rise in mass shootings motivated by hate, including attacks in Buffalo, N.Y., and Uvalde, Texas. “That’s a very modern phenomenon, which trends really with the rise of internet and social media.”